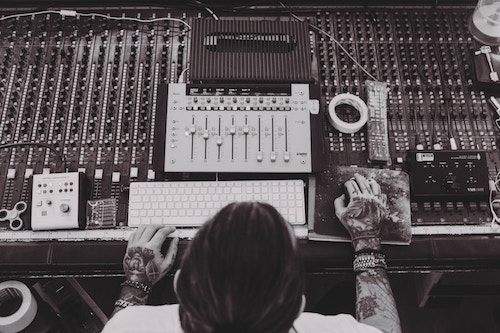 For those who work in sound or music, either professionally or a serious passion, the built-in sound card that comes with your computer just isn’t going to cut it. For recording and mixing music, consumer-grade stereo and an inability to connect the instruments you need means that your standard sound card simply isn’t the right choice. What’s where the audio interface comes into play. Furthermore, a traditional sound card can litter your recordings with radio interference, jitter, and excessive latency problems.

Basically, audio interfaces allow you to record sounds, such as vocals and instruments, and converts the sound into digital formats at the quality that matches your expectations. Built with I/O ports to suit a range of instruments and with an analog-to-digital conversion that ensures high quality, they are practically an essential tool for anyone hoping to record their music to their computer.

When looking at devices, we’re going to look at how low their latency when recording is, what kind of I/O ports they have, as well as the interface they use to connect with your devices and the pros and cons of each interface mentioned.

Now, it’s time to look a little more closely at your options. Which amongst the following is the best audio interface on the market? 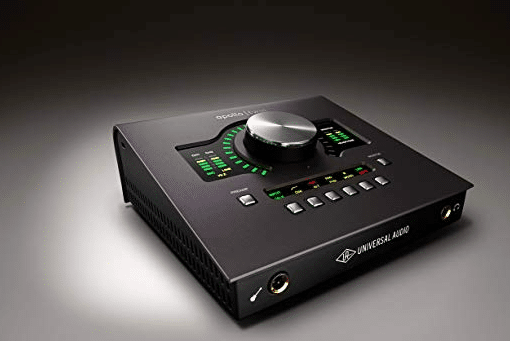 Bringing a high quality 24-bit/192 kHz audio conversion, this Universal Audio interface connects to your computer using Thunderbolt. This is one of the better audio interface standards, with extremely low latency, and one of the more cost-effective high-end formats, to boot. Despite the fact that it’s the smallest of the Apollo Twin MKII family, the Solo still allows for five analog-to-digital inputs, as well as 8 channels of digital input.

The clarity and quality of a range of different sounds is hard to beat, with not only the professional grade standard pre-amp, but also thanks to the plugins that come alongside the standard recording suite. These plugins essentially allow you to emulate different pre-amps, ensuring you get the sound you want, at the kind of quality that you desire, adding real-time effects with next to no latency. This allows not only for top-notch recording, but also an experience that’s much like singing into a real preamp or playing guitar with a real distortion pedal.

Compared to some of the other devices here, it might be considered relatively expensive. Others have noted that the interface is harder to learn than some others, especially with the functionality split into different software/apps, so it might not be the best fit for those who are new to sound interfaces. However, if you’re a professional looking for professional-grade equipment, it certainly delivers. 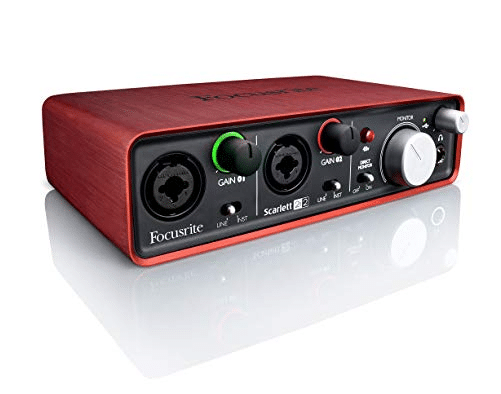 The Focusrite Scarlett 2i2

Smaller, yet also significantly cheaper than the Universal Audio interface, this device, from Focusrite Scarlett, is built for portability, and its USB audio interface means that it doesn’t need an external power source, so it can more easily be used with different devices. It may not have a latency as low as Thunderbolt interfaces, but that doesn’t necessarily mean that it’s going to cause major problems, either.

The Focusrite brings 2 high-quality mic preamps, allowing you to record two analog-to-digital channels at once. For the relatively low cost, it can make the most out of a decent microphone and a well-designed sound room. There are a lot of intuitive features that help streamline the recording process and help you correct issues all the quicker. For instance, this includes the LED ring around the gain that turns red if it detects clipping issues. For the price, it gets surprisingly close to commercial grade quality in its recording, both with voice and with digitizing your guitars.

As smaller set-up, the Focusrite Scarlett is better designed for musicians who don’t need to record too many tracks at once, rather than, for instance, recording a whole band. Furthermore, some users have noted issues with downloading the drivers, but the USB-connection should work fine with the drivers you already have installed on your computer, so it may be worth considering skipping those you’re prompted to download entirely. 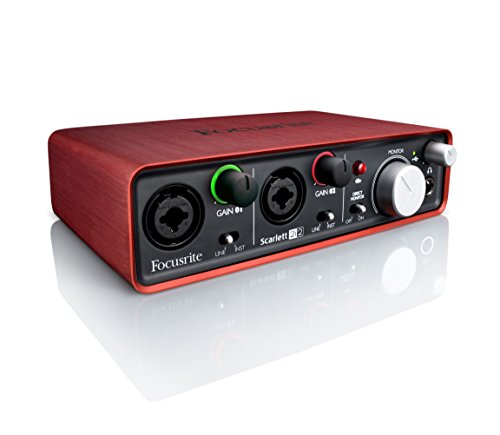 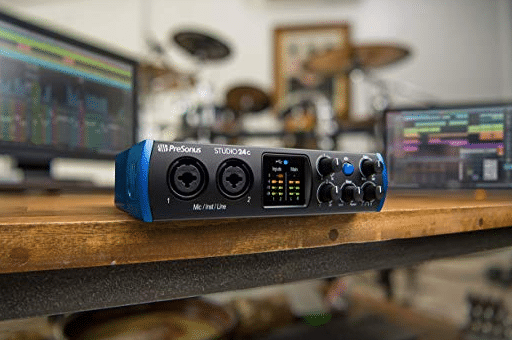 Another of the smaller audio interfaces, the PreSonus Studio has two preamp inputs, as well as two TRS main outputs on the front control panel, just like the Focusrite, but is a significant deal cheaper, at the same time. It has a USB connection, like the Focusrite, too, but runs on USB-C, which means that you can expect a little more latency. Easy to set up, with great value, this can be a great interface for beginners.

However, despite the relatively lower quality of the interface method, the sound quality when recording with the PreSonus is surprisingly clean. For the size of it, this device is solid and stable, and it’s very quiet, making for easy recording. As such, it’s great as a portable device. Special mention has to be given to the simplicity of the interface, which makes the PreSonus a lot easier to learn than some of the other options out there. Another added bonus is the ability to control headphone and main output levels independently, which can be difficult to find on audio interfaces in this price range.

One of the issues that some of the users have noted running into, however, is that getting support from PreSonus can be very tricky indeed, as they don’t have any available means of getting directly in contact except for sending ticketed messages to the support team and waiting for the response. However, it does have an active community of users on the forum who tend to help one another out with better understanding or troubleshooting their devices. 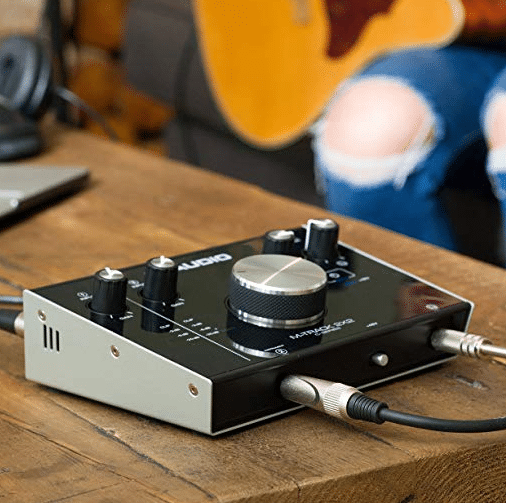 Yet another 2-in/2-out audio interface connecting to your device via USB, the M-Audio M-Track is not only the cheapest interface we’re reviewing here, it is also easily the most portable. Those who are new to audio interfaces are also going to appreciate the incredibly intuitive design, with settings controlled via analog dials and clear labels that make it easy to get to grips with even as a brand-new user. It works with a suite of software, including Pro Tools First, Eleven Lite, Strike, and Xpandi2, all of them making it easy to find your preferred way of using the device.

Pro Tools First is one of the better aspects of this audio interface, which provides studio quality interface control on a device that’s much more cost-effective than it might need. The USB connection makes for easy plug and play, meaning it’s not too difficult to get started with it immediately. Features are relatively basic compared to some of the other devices here, but the mic preamp is anything but, offering one of the highest digitization qualities for such an entry-level device. Plus, some people just love that retro chassis design.

Some people have noted issues with the input jacks being a little sensitive if cables are moved too much, as well as installation processes that render it unable to connect to the computer without a little working around. However, most have already found and posted working solutions for this common issue online. 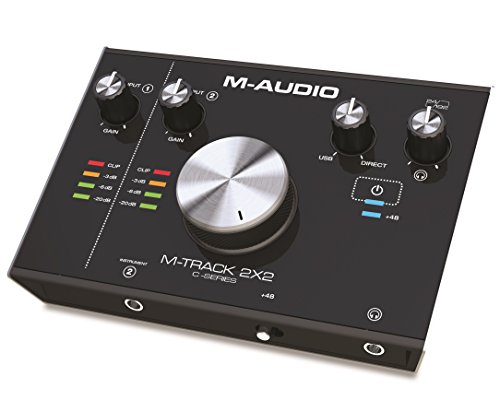 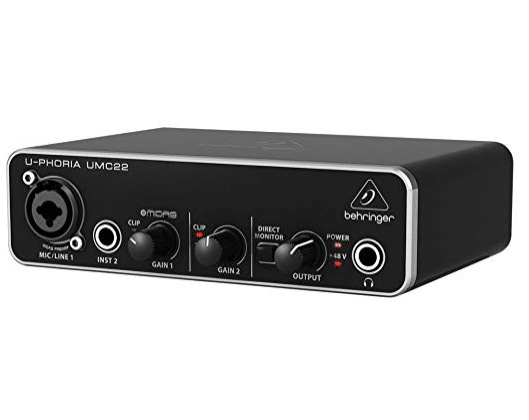 The last of our reviewed devices, and the last 2-in/2-out USB connected interfaces, the BEHRINGER is also the lowest priced one we’re going to be looking at, which may be a surprise, given the reputation of the brand for excellent quality recording devices. Another plug-in-and-play device, It requires no drivers to get recording immediately, and also features intuitive design with controls operated by analog knobs across the front of the device.

Don’t be fooled by the price, the BEHRINGER offers lifelike quality for vocals and acoustic guitar, with very low latency. It’s able to support professional level 48v condenser mics and its small, sturdy design means that it’s great for portable use. Though it’s lacking in features compared to some of the others reviewed here, some say it might offer the most bang for your buck, when it comes to the quality of the recording relative to the price

There are a few small issues that some users have found with the BEHRINGER, primarily a small hissing sound that can appear when the mic gain is turned too high. If you’re using it on Mac, rather than windows, you also need to make sure you set USB to your primary audio input if you don’t want to have to download a driver for it. 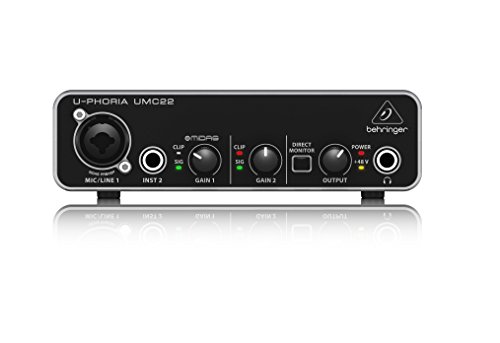 How To Choose An Audio Interface

Here is a great YouTube video that talks about the basics of audio interfaces, and how to choose the right one for you:

Which device best suits you depends on your needs. If you’re looking to record an album with a whole band, or you need an audio interface that offers true professional recording capabilities, not unlike what you would find in a studio, then the Universal Audio Apollo Twin MKII Solo is the clear winner. None of the other devices offer the recording studio experience quite like it.

If your needs are a little more modest, however, it becomes trickier. The BEHRINGER audio interface offers the most cost-effective option, with great quality for its price but if you’re aiming for professional quality, the M-Audio M-Track edges it out due to the wide host of high-grade software it comes with.