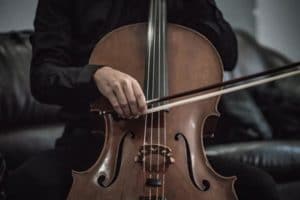 Music has always been as important to humanity as speech.  We use it to communicate without the need for words, to tell tragic histories and stories of triumph, to give meaning and purpose to the world and share both our most basic and eloquent desires, concerns and sentiments with each other. It is a universal language that we can all understand.

Just as discourse and our mass lexicon have evolved over millennia, so has music. A constantly changing force that is as malleable as the imaginations and minds that shape it, music is the background hum that has charted and chronicled mankind’s past while spiraling toward the future. It has been a refuge from harm and the place of joy that we retreat to when life, the universe and everything they hurl at us become almost too much to bear.

While music and the ideas that govern its development are continuously changing, the manner in which we choose to experience, enjoy and play music has remained, for the most part, constant.  For more than half a millennia, one of the most favored ways we have chosen to savor music is through orchestration.

Orchestras have been our primary source of musical exploration for more than five hundred years. They are as ingrained in our psyche as the moon, the stars and the ground under our feet, and will doubtless continue to be so for eons to come.

Composed of brass, wind and string sections, orchestras utilize a variety of instrumentation to transform complex and elemental compositions into the most sublime, grandiose and magnificent music that lift our souls to the sky and enrich every facet of the human condition.

The brass section gives an orchestra its strength and power, the wind section provides melody and the strings are entrusted to deliver the emotional punch that any orchestra needs to draw the audience into the soundscapes it creates.  Without a string section, an orchestra would lose its majesty and sense of identity.

At the heart of any string section is the cello. The cello is a four-stringed instrument that is part of violin family and while it is mainly played with a bow, it’s versatility as an instrument means that it can also be played by plucking its strings. Rising to prominence at the end of the seventeenth century, it has been a mainstay in orchestras since the beginning of the twentieth century.

Traditionally made from wood, the cello is the bass voice of a string section and due to its size needs to be balanced on the floor via an endpin that provides additional support for the musician who has mastered, and plays, the instrument.

The cellos sturdy, hollow construction is responsible for creating the deep, sonorous tone that it is known for and while tradition is of utmost concern to musicians and orchestras alike, time doesn’t make any allowances for it.

The cello, like music, has evolved and entered the digital age.  Its manufacture has moved beyond the world of wood, embraced electrification and adopted the philosophy that technology, rather than being feared, can increase the potential of anything and everything that it touches.

That said, let’s leave the traditional world behind, and explore the future by looking at five of the best electric cellos that are comfortable, and easy, to play for both amateurs and professionals and will provide any orchestra with the cavernous beating heart that it requires.

Rapid advances in technology mean that centuries-old rules have been thrown out of the window. Cellos don’t have to conform anymore. They can be anything they want to be.  The Stagg ECL 4/4, has shed the excess body weight of a standard cello and slimmed down to a sleek body and fingerboard design that mean it looks like it belongs in a George Lucas film rather than a painting of Mozart leading a frenzied orchestra.

Having both an output jack that’ll connect it to amplifiers big and small and a headphone input ,  Stagg ECL is equally prepared for those quiet moments of self-reflection and solitary practice and being the center of attention in concert halls the world over.  And thanks to its active pickup, when it needs to be heard, with a simple twist of its volume knob, the Stagg ECL will roar.

Innovation and inspiration have ensured that the Stagg ECL’s stunning beauty is matched only by its incredible performance in the orchestra pit and the more subdued confines of its owners home. 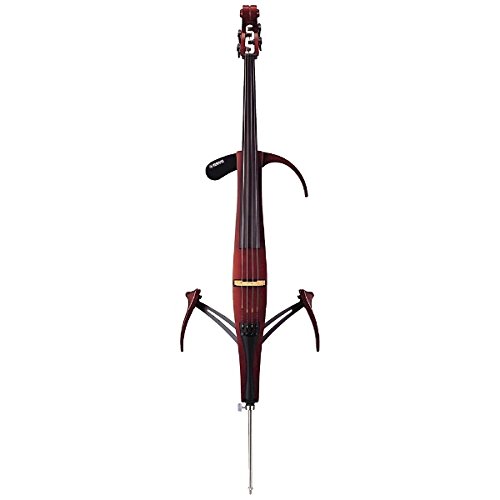 One look is all it takes. One glance at the Yamaha SVC-210SK is all it will take to make you fall in love with it forever. Now you’ve seen it, you know what we’re talking about. It doesn’t just capture an audience’s heart with its vibrant, rich sound, it bewitches whoever plays it.

Fusing the new world with the old, the Yamaha SVC 210SK as well as having a sleek body design has a fully adjustable silver endpin and knee and arm rests that allow it to be played by jus abut anybody with an ear for the cello.

With a tone and sound as rich and dark as it appearance suggests, the SVC is a seriously sexy cello that envelopes everybody in the sweet music that it makes. 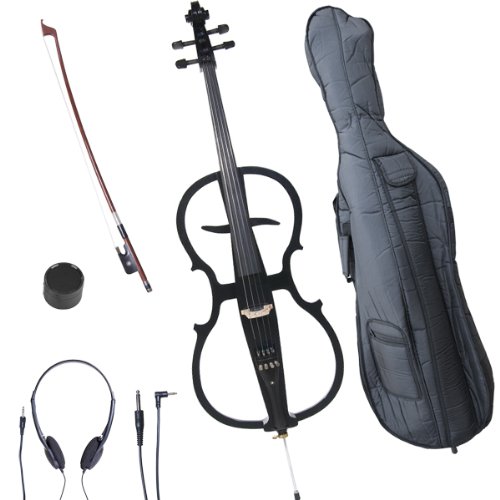 If you’re looking for an electric cello that punches way above its weight and is durable, reliable and has the kind of looks that’ll turn all sorts of orchestral heads, then look you don’t need to look any further than the CECO-1BK.

Designed and manufactured by Cecilio, who is fast becoming one of the most tried and trusted names in stringed instruments, the CECO-1BK favors a more traditional look, albeit one with a modern twist. It’s also packed with all sorts of incredible features that make it stand out among the competition. This cello will do just about anything you want, and need, it to do except sit up and beg.

Fantastically well put together, the CECO-1BK’s build quality mirrors it’s wonderfully resonant and rich sound. Whether you’re in the middle of writing your latest opus at home or immersed in a performance for a sell-out crowd, the CECO-1BK will never let you down. It might not have a name that rolls off your tongue, but once you’ve played it, you’ll never forget it. 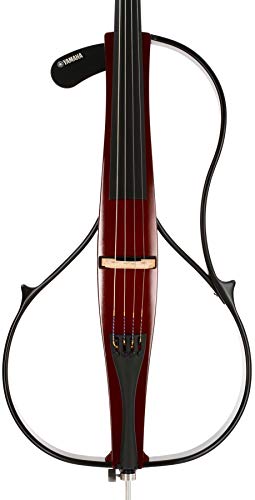 Another Yamaha and another of their world-class SVC models, the 110 is designed to thrive in all of the environments that an electric cello should. The coy carp of cellos, the 110 is equally comfortable whether it’s amplified or being played acoustically.

While the other SVC model on our list pushes the cello design envelope in a more space-age direction, the relative simplicity of the 110 immediately identifies it as a more sedate and measured instrument. However, that doesn’t mean that it doesn’t share some of that wild SVC design DNA.  You’ve seen it; you know it does. Bu the 110 chooses to express its seriously appealing looks in a far more dignified manner than the rest of the SVC family.

It’s more traditional looks mean that its acoustic performance outshines and outplays its more expensive cousin and as such it lends itself to the more serious and studious practitioner. Understated and impressive, the 110 is proof positive that style and substance can peacefully co-exist. 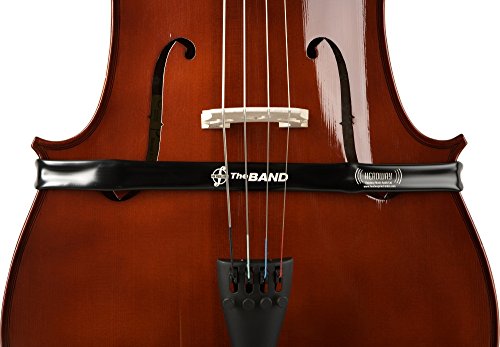 An out of left field option that offers an electrified solution for the more fiscally minded cello player is ‘The Band’ from Headway.  It’s an easy and relatively cheap, way of converting your acoustic cello into an electric model.

‘The Band’ is essentially a mobile cello pickup that, thanks to its Velcro fastening, can be wrapped around almost any cello and connected straight to an amplifier. It will immediately electrify your existing cello and remove the stress, hassle and financial worry of having to step up a rung on the instrument ladder.

Simple to store (just fold it up and put it in your cello case when you’ve finished using it), The Band relies on a passive rather than an active pickup, which means that it doesn’t even need a battery to power it. Just wrap it around your cello, plug it into an amplifier and you’re good to go with your “new” electric cello.

While there’s a lot to be said for tradition, the world is moving forward at an increasingly rapid pace and even the most staid of sentimental nostalgia obsessed hold outs are beginning to move with it. The best electric cellos have one foot in the world of tomorrow and the other in yesterday.

Imbued witha soft, rich acoustic sound that takes on a whole new dimension when they’re amplified, electric cellos are the future of string instruments. Time moves onward and music, in all of its glorious facets, moves with it.  And you should too.

Room For Another One?

Whether you’re taking your first tentative steps into the world of the cello or are an orchestral veteran, one of the most pressing questions that you should really be asking yourself is, do I have sufficient space for an electric cello? Do I have the room to safely store it and the space that I need to play it?

What Kind of Electric Cello Am I Looking For?

Are you a professional musician or an amateur who plays for his or her own pleasure? Do you want you electric cello to keep pace with an orchestra or is it something to be enjoyed in those rare quiet moments?

While, ideally, you should be asking yourself all of those questions, the only person who can really answer them, is you. Only you know what you want, and need, from an electric cello. But whatever your answers are, there’s an electric cello on our list with your name on it. All that you need to do is decide which one is going home with you…