Skip to content
A Short History Of The Ukulele

A Short History Of The Ukulele 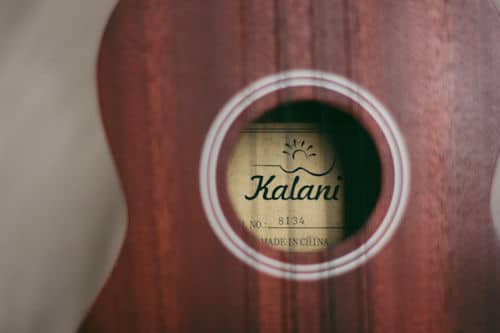 Most people recognize this little instrument at first glance. The ‘ukulele (or ukulele, as it’s spelled in American English) has become synonymous with vacation photos, luaus, and hipsters playing their rendition of “Can’t Help Falling in Love” by Elvis Presley. But this tiny instrument has a big history, from being a world traveler to winning the ear (and heart) of a queen, there’s more than meets the eye when it comes to the renowned ukulele.

While the ukulele has come to be exclusively recognized as the instrument of choice from Hawai‘i (and was the national instrument of the Kingdom of Hawai‘i in the early 1800s by decree of Queen Lydia Liliʻuokalani), the instrument actually originated in Portugal. Known as the machete do braça, braguinha, rajāo, and cavaquinho in Portugal, the first luthier in Hawai‘i was Miguel Nunes, a cabinet maker who had come from Madrid in 1879 to work on the sugar plantations in Hawai‘i. Soon other luthiers made their claim on this innovative instrument, and an industry was born.

A Uke By Any Other Name

While everyone recognizes the word “ukulele” (and very few people know how to spell it correctly their first try), the origins of the word itself are a little hazy. There are three main theories for where the name came from, but in the end, we can’t be sure what inspired this pint-sized powerhouse of an instrument’s name.

‘Ukulele can be broken down into two parts: ‘uku and lele. The ‘okina (that backward-looking apostrophe in front of the original spelling for the instrument’s name) is important to the mythology behind the name, as “‘uke” means “flea,” while “lele” means “to jump.” An interesting name for an instrument for sure. We promise the average ukulele does not come standard with fleas! Some say that a skilled ukulele player makes their fingers jump across the instrument so quickly, it’s like watching fleas jump off of an animal. An odd comparison, but if you’ve ever seen ukulele masters like Jake Shimabukuro work their magic, you’ll understand the origin of this name.

The next example of the name origin means “jumping men.” After sailing aboard the SS Ravenscrag from Madrid to the islands over the course of 123 days (talk about a long commute), the sailors were so overjoyed to see land that they jumped for joy, and some jumped overboard to swim to the shore in their excitement. Since this vessel brought the first ukuleles to the islands, it would make sense that the sailor’s celebrations inspired the instrument name.

The final name origin is much sweeter. Queen Lydia Liliʻuokalani was very fond of the instrument and was renown for her musical abilities along with her three siblings (known as the Royal Four). She took the work “uku” and chose the meaning of “gift” instead of the less than ideal meaning of “flea,” naming the ukulele “gift from afar” in reference to the instrument’s journey from Madrid.

While none of these three meanings can be definitely proven, we like to think of the ukulele as a gift to anyone who decides to pick up and learn this amazing instrument.

Aloha to the World

Thanks to the rise in popularity of ukulele music in the early 20th century, ukuleles became popular on the mainland and soon became associated with the tropical lifestyle of the Hawai‘ian islands. Thanks to Dole pineapple advertisements, the instrument is forever paired with the image of sparkling shores and tropical foliage, long after the instrument has earned its place outside of the novelty category that many relegate the ukulele to. Still, ukuleles remain one of the most popular gifts people bring back from their vacation to the islands, but mastering the instrument itself has a large amount of skill behind it.

While many people can learn to pluck out their favorite tunes on the instrument (if you want to learn to play check out our review of the best ukulele for beginners), tuning a ukulele by ear is an incredible feat that takes years of practice to master. The easiest way to make sure your ukulele is tuned properly is to strum down all four strings while singing the classic intonation of “my dog has fleas” to the tune of the strings. Most people tune their ukulele using an electric tuner, but there’s something satisfying about tuning an instrument using the “my dog has fleas” method, regardless of whether you’re successful or not.

No matter the ukulele’s true name, this tiny instrument is sure to gain a big audience whether you’re inventing your own music or playing the classic “Aloha ‘Oe” written by Queen Lydia Liliʻuokalani herself, this instrument is sure to strum its way into your heart and bring dreams of tropical shores along with it.